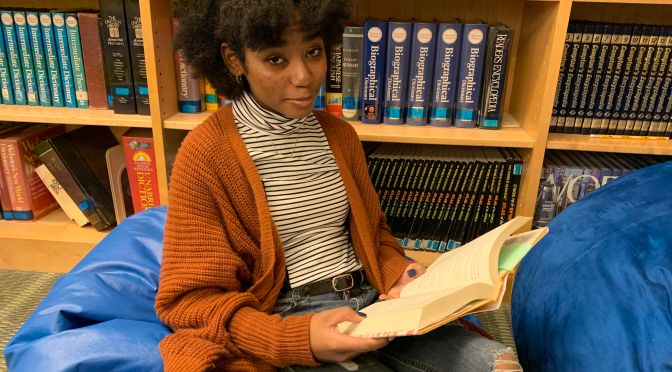 The chilly winter air forces you inside, where the warm fire burns and beckons you to curl up beside it and travel to another land. Who doesn’t love a good book? This winter, The Squire is here to help you find that page-turner that transforms your night into an epic tale of sci-fi, mystery, or even romance, and then we have an exclusive interview with Battle of the Books participant, Nataly Clark.

The Martian by Andy Weir – Acclaimed as one of the best books of the decade, The Martian is a survival tale of astronaut, Mark Watney, stranded on Mars with no line of communication to Earth or the rest of his team. He must draw from his ingenuity, survival skills, and stubborn refusal to give up to overcome the obstacles keeping him from making it back home.

Annihilation by Jeff Vandermeer – Annihilation follows a team of four expertly trained women on an expedition into Area X, a mysterious alien land that started forming inside of borders guarded by the Southern Reach. The main character, a biologist, faces an unreliable crew, a test of her strength, and a terrifying new world inside the borders of Area X.

Gone Girl by Gillian Flynn – One summer day in North Carthage, Missouri, Nick Dunn’s beautiful and clever wife, Amy, mysteriously disappears. Under the watchful eye of the media, Amy’s parents, and suspicious law enforcement, Nick must uncover what really happened to his wife – and stand by his innocence.

Room by Emma Donoghue – Room is home to Jack, but to Ma, it is the prison where Old Nick has held her captive for seven years. Through determination, ingenuity, and fierce motherly love, Ma has created a life for Jack. But she knows it’s not enough…not for her or for him. She devises a bold escape plan, one that relies on her young son’s bravery and a lot of luck. What she does not realize is just how unprepared she is for the plan to actually work. A thrilling story of survival and escape written entirely from the perspective of five year-old Jack.

Me Before You by Jojo Moyes – Louisa Clark is an ordinary girl from a small village who one day takes a job working for the former playboy daredevil, Will Traynor, who is wheelchair bound after an accident. Will is moody, acerbic, and slow to accept help – stuck in the mindset that his life will never be the same. As their love story unfolds, Emilia sets out to show Will that life is still worth living.

Eleanor and Park by Rainbow Rowell – Set over the course of one school year in 1986, this is the story of two star-crossed misfits – smart enough to know that first love almost never lasts, but brave and desperate enough to try. When Eleanor meets Park, you’ll remember your own first love – and just how hard it pulled you under.

With our Eisenhower Battle of the Books team’s first competition coming up this March, participating students have been reading feverishly to prepare. We asked junior, Nataly Clark, about some of her favorite books and her experience in BoB. Nataly’s favorite book last year off the BoB list was Simon vs. the Homo Sapiens Agenda, by Becky Albertalli. “I liked the plot a lot, and it was a really funny book,” Nataly told us. As far as her favorite book of all time, Nataly decided, “Can I say a series? The Harry Potter series… I liked it because I got really attached to the characters, and it was just good.” Nataly claims her favorite place to read is her bed, but she can often be found curled up in the corner of the Eisenhower library.

When asked for a book she’s read that also had a decent movie, Nataly lamented, “all the books I read have terrible movies…” until remembering, “Oh, The Hate U Give! That had a good movie.” As far as what she’s reading this year, Nataly says she read The Way You Make Me Feel by Maurene Goo. “It was good, I finished it in, like, a day.”

Battle of the Books competes at Gannon on March 6, but even if you’re not in it, the winter is a great time to pick up one of these books and enjoy a beautiful story that will keep you company during these cold and boring months.

Summaries created with help from goodreads.com.