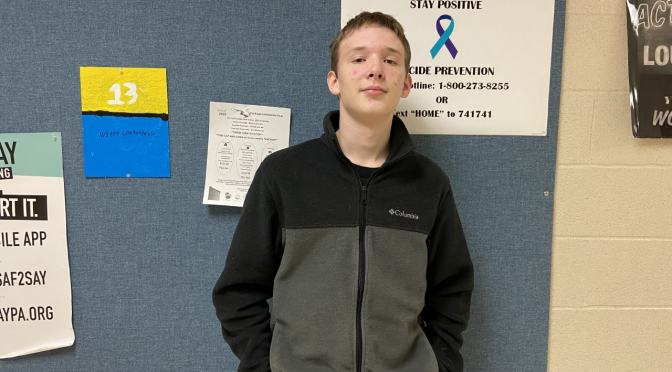 There have been many students in the high school who have been chosen for student spotlight. This year, Jace Turner, an eighth grader at Eisenhower Middle/High School, has been chosen for our Middle School Student Spotlight.

Jace has recently taken a trip to Washington D.C. with a program he is part of called Civil Air Patrol, making him a middle school student with a very unique experience worth sharing. The Civil Air Patrol, developed during WWI to stop Germans from coming into the U.S., is now part of a ground team where they search for lost hunters or lost Boy Scouts. The process of ground works like this: someone has to be missing for twenty-four hours, then they send out the drones to take pictures of the area that the person was last seen. Next, the pictures are developed and created into a 3D model of the area. From the technology program they use, they can pick out things that shouldn’t be in the landscape model, helping them to find the missing person.

Last year, the program decided to take a trip to Washington, D.C. The groups left on December 13, 2019, and stayed for two days before coming back on December 15, 2019. The main purpose for the trip was to visit Arlington National Cemetery, a military cemetery in Arlington County, Virginia, across the Potomac River from Washington, D.C. Jace described his experience as, “We each had our own groups. There’s Alfa, Bravo, Charlie, Golf, and Foxtrot. I was on team Foxtrot.” Jace later clarified that the reason for the groups was because it would be easier having smaller numbers instead of having all twenty-four precipitants in the same area.

“When we got down there, we had lunch at the Capital Building and toured the Capital Building,” Jace explained. Throughout the next few days, Jace, along with the other squadrons on the trip, visited the National History Museum and the National Archives. “I got to see the President fly in on Air Force One and I got to see the Air Force band play,” Jace shared. “I also got to touch the Washington Monument, the Lincoln Monument, and the Reflective Pool.”

Over the last few years, Jace’s interest in the program piqued, beginning with when he was told by his grandmother about this program when he was about ten years old. Although he had lost the pamphlet, he was reconnected with the program at the Warren County Fair. Soon after, he met with Commander Lieutenant Colonel Tom Brown, a retired Air Force Lieutenant, and second Lieutenant Johnson, who runs the Civil Air Patrol in Warren County. “I decided to go down one night and I fell in love with the program from there,” Jace explained. “We have cadets from all over Warren County.”

Jace has always had the dream of joining the military, and after viewing the many monuments in D.C. for the different wars and experiencing the Civil Air Force Program, his dream has become stronger. “I hope one day that I do something good enough in the military that I might have my own monument,” Jace shared.

If any Eisenhower students are interested in joining the Civil Air Force program, they meet every Tuesday night from 6:15-8:30pm. “We would like to build our squadron bigger,” Jace said, as he described their hope for continuing to build the local chapter of the Civil Air Patrol. Those interesting in more information on the program, can visit their Facebook page, Civil Air Patrol – Warren County Cadets, where they have different squadrons to visit. Best of luck to Jace and all Civil Air Patrol members as they continue in the program.