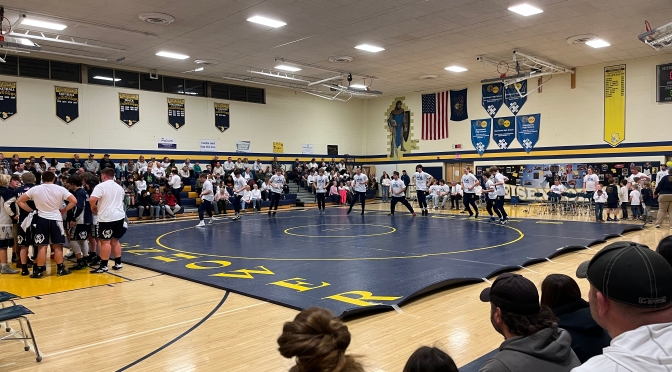 With boys’ winter sports winding down, the wrestling team and basketball team are putting forth their best in their last few matches and games of the season. The Squire interviewed Gannon Jaquay and Jake Venman to get some insight on their seasons. With Covid being a major factor last year during their seasons, these teams are ready to get back to having fans cheering them on as they head towards victory!

The Squire sat down with senior, Gannon Jaquay, to get input on the wrestling team’s season. Jaquay has been very successful in his wrestling career; within the next few matches he should reach 100 wins, and he shared that it makes him feel great to possibly have his name up on a banner with the best Eisenhower wrestlers. We asked Jaquay what he plans to do to reach 100 wins and he explained, “I need to wrestle the best I can and go as far as I can in post season.” Wrestling is a mind strategy sport, and you need to be prepared for any move your opponent may make. Every team has different strengths, and Jaquay shared that his biggest strength is always keeping his head in the match. He also explained, that as a team their biggest strength is staying calm throughout the match. As a senior, Jaquay has created many memories and accomplishments throughout his years of wrestling. The Squire asked him what he was going to miss the most, and he responded, “My four years (of high school wrestling) flew by and I’m going to miss it. The thing I will miss the most is having a fun time with my teammates and laughing with them.” To those just starting out to wrestle, Jaquay gives the advice to just have fun with it and “try to get 1% better every day.”

Next, The Squire sat down with senior basketball player, Jake Venman. The basketball team has had a great season thus far, with a winning record. The Squire asked Venman what he thinks the rest of their season is going to look like, and he shared, “At this point we’re looking really good to be in a decent spot for playoffs. I think we will win most of our games and finish the season with a winning record. The team has recently acquired a new coaching staff and had to adjust to a different schedule, coach, and game strategies. Even with new changes for the team, according to Venman, the team is still super hard working, and they get along well, which are great strengths for them to have because basketball is a team sport. Basketball has been a part of Venman’s life for quite some time now, and The Squire asked him how he felt that it was last season of basketball. He shared, “It will be tough leaving it all behind, but I will miss all the fun moments and close games we pulled off.” As his career ends, Venman gives the advice to, “Always work hard and don’t waste any moments.”

The Squire would like to thank Gannon and Jake for giving us the inside scoop on their season and wish them good luck on the rest of their seasons and their future endeavors!