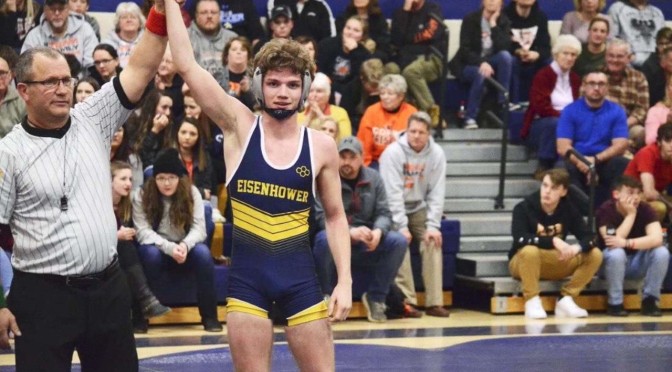 On Wednesday, January 15, 2020, the Eisenhower Knights wrestling team had a match against Corry. Although Eisenhower as a team did not win, the evening was exciting, as Senior, Logan Jaquay, broke the school record with 118 wins. Previously, Eisenhower alumni, Travis Hummel, held the school record, with 117 wins from 1994-1997.

The Squire asked Jaquay questions about his match to gain some insight into how it feels to have such an accomplishment. First, we asked him his thoughts before the match. He responded by explaining that he had planned to, “just go out and win and have fun.” He went on to share how he prepared for the match by, “working hard every day and doing everything right with my diet.”

After his match, Logan was excited but also looking to the future, telling The Squire, “It was good to get it out of the way and it was exciting, but there is more I want to accomplish.” More goals Logan has this season are to break the county record and to finish with another state medal. After high school, Logan would like to wrestle in college and after that, coach a team of his own.

Be on the lookout for some of our very own EHS wrestlers advancing beyond the regular season this year. The Squire will be catching up with Jaquay again soon as he continues into his post season wrestling experiences.

The 2020 PIAA Team Wrestling State Championships is in Hershey, PA at the Giant Center in the first week of March. If you cannot go to Hershey Park to watch the championships in person, you can log into http://www.flowrestling.org to watch it live. Logan Jaquay has an undefeated record so far this year and is still going strong. We believe that Logan will go far into states and bring back another medal. As the season is almost to an end with only a couple matches left, and then states, we would like to wish Logan Jaquay good luck.