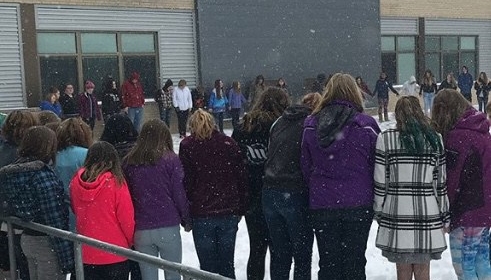 To the people who think I’m protesting just to get out of class:

I walked out in remembrance of the seventeen Parkland victims and all of those who have lost their lives due to gun violence. I stood outside in the twenty-three degree wind and snow for seventeen minutes in hopes that no family will ever have to feel that pain again.

I walked out because although you tell me it’s not going to do anything, I’m speaking volumes without saying a word. In fact, that is how we have operated and solved problems as a country for hundreds of years. Peaceful protest and civil disobedience HAVE evoked change in our country.

I walked out because somebody should NOT have the ability to enter a store and walk out with an AR and multiple rounds of ammunition in under an hour without paying a cent upfront in countless states across America. I don’t believe in stripping anyone of their constitutional right to bear arms, but I do feel that we, as a country, have made it incredibly too easy for devastating weapons to land in the wrong hands.

I walked out because even though my friends and family don’t approve, someday, I want my kids to feel completely safe and secure every time they go to school, a movie, or any public place for that matter. I chose to protest for the well-being and safety of my brother and sister, my parents (who both work in schools), my friends, my teachers, and all my other loved ones because I could not imagine a day without any of them.

I walked out because I see that guns are not the only problem – mental health and bullying play an enormous role in why these countless tragedies have been occurring. These topics have gone ignored and been swept under the carpet for FAR too long and its time we all speak up for those who cannot.

I walked out, not in protest of our school district, but in gratitude and gratefulness for the steps they are taking to make our schools safer. However, this issue is something that goes far beyond what they can do. I think that no matter who you are, what your beliefs are, or what political party you associate with, we can all recognize that gun violence, specifically in schools, is a significant problem and agree that steps need to be taken to address and change it.

I walked out because calling attention to this problem is the BEST thing we can do right now.

I walked out because enough is ENOUGH.

As most of you know, the classic Mr. EHS competition has just passed by. This year, the event was held on Wednesday, March 1, in the Eisenhower auditorium, and, as always, supported the EHS Journalism program. END_OF_DOCUMENT_TOKEN_TO_BE_REPLACED

Have you ever just gotten bored on a lazy Saturday evening perusing Netflix for something new and refreshing to watch? Well, look no further than CBS’s thrilling crime drama, Limitless, starring Jake McDorman and Jennifer Carpenter. END_OF_DOCUMENT_TOKEN_TO_BE_REPLACED