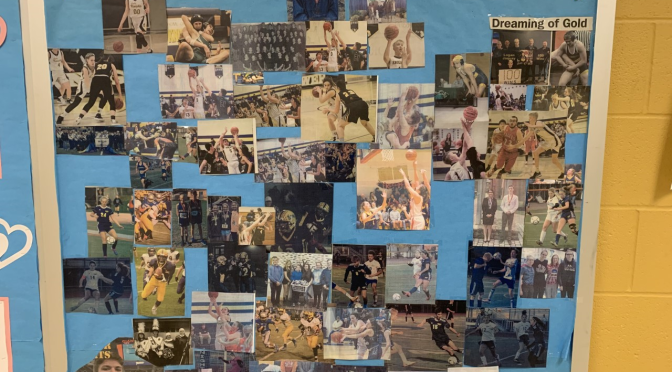 In the mid-season of winter sports, the basketball and wrestling teams are continuing to look forward on the rest of the season. The basketball team had a rough start, but they continue to improve and use their ability the best they can. The wrestling team is having an incredible year all around. With these thoughts in mind, The Squire sat down with senior basketball captain, Drew Williams, and sophomore wrestling captain, Cael Black, to learn more about them and their seasons.

The basketball team currently has a record of 5-9, but that does not stop them. Drew Williams, a senior captain of the basketball team, hopes to turn this record around as the season continues on. When asked about how Williams feels about their season so far, he says, “it started off slowly, but getting some wins under our belt will help us turn things around.” With this in mind and some tough competition, he has high hopes for the rest of the season. Along with getting some wins, the team seems very unselfish and have faith in each other when they get on the court. The whole team has the competitive drive, which also helps everyone want to win.

While the basketball team has the motivation to win, there are some areas of needed improvement. Aspects they struggle with include not letting the score get to them when they are down and defensively not letting teams go where they want. Williams feels that he has personally had a strong year so far, but, of course, there is always room for improvement. He has some goals of his own, which include not having as many turnovers as the season continues. Since Williams is a senior and he does not plan to further his basketball career as a player, he looks forward to enjoying the remainder of the season.  He may even have an interest in coaching in the future to share his love and knowledge for the sport.

The wrestling team, sitting at a 5-2 record, is having a pretty great year. They have had a couple really big accomplishments and plan on continuing the momentum throughout the rest of the season.

Cael Black, a sophomore and captain on the wrestling team, seems to know his plan and how to achieve it, but there are always setbacks to move on from. Black did not start the season how he planned to, but he is progressing and working every day to improve that. He shared with The Squire that he would like to improve his conditioning and work on top to achieve his major goal, which is a state medal. Black believes his strongest area is when he is wrestling on his feet. When asked about how he prepares for a match, he explained, “A lot of mental visioning and good music to warm up. Then Easton barking at me before I go out to wrestle.” Black is only looking up from here and plans to keep working his hardest to improve for each upcoming match.

Both teams have been successful this year and, although the basketball team is not at a current winning record, they have already improved immensely from last year. Wrestling, continuing with another good year, has high hopes looking into the post season for some of their strongest wrestlers.

The Squire wishes these teams the best of luck as their seasons continue and wrap up. Be sure to stay up to date on boys sports by following The Squire’s Instagram and Twitter or watching W-IKE News Show.