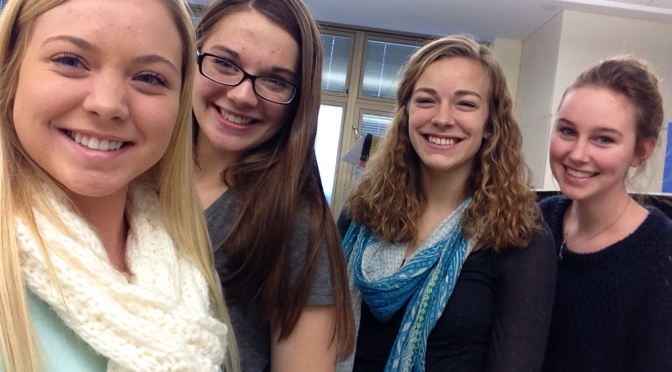 As many students at Eisenhower have probably heard, we are yet again host to another exchange student. She has made many friends here at Eisenhower, despite how far she is from home. The Squire sat down with German exchange student, Anne Krumm, to ask her some questions.

TS: What do you think of Eisenhower so far?

AK: It’s very nice. The school is smaller than my old school (Warren), but the people are nicer.

TS: How is school in America different than it is in Germany?

AK: Oh my gosh; there’s so much! It starts with the shuttle. So, normally I have two breaks during the day, so after two periods I have a break. Normally I have six periods, not eight, so I can go home at 1PM. We have three different kinds of high school. After graduation, it’s pretty much the same; you can go to college or university.

TS: What inspired you to take the opportunity to become a foreign exchange student?

AK: Since we have English for the second language, I want to learn it better and speak like an American.

TS: Is it difficult being so far away from home?

AK: Oh, yes, it is difficult. From my boyfriend, my friends, my family, the German food, and the normal day from home. But it’s good if you have friends here and a good school.

AK: My favorite would have to be burgers, and bacon and eggs.

TS: Are you planning on traveling to any other part of the United States?

TS: What do you want to do after you graduate?

AK: I don’t know. If I have my German graduation, I’ll go to university. I really don’t know what I want to be, maybe something with marketing.

TS: If you could travel anywhere, where would you travel to?

AK: I don’t know where I want to travel to next June once I am home.

As you can see, Anne is fitting in very well! She is enjoying the American customs and people, even though she’s far away from home. If you see Anne in the halls, be sure to say hello! Good luck in all you do, Anne!