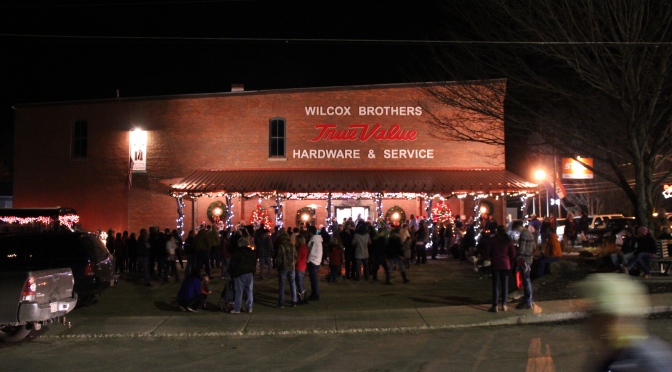 The orchestra had been preparing for the performance since the beginning of the school year, practicing every day in eighth period. The songs they selected included such holiday classics as “It’s the Most Wonderful Time of the Year”, “We Need a Little Christmas”, “Greensleeves”, “Suite of Joyous Carols”, “The Christmas Song”, “Theme from Canon in D”, and several traditional, sing-along favorites. The concert was held in a cozy room part of Northwest Savings Bank, and the students got in the holiday spirit with various decorations.

Their music selection expanded for the Sugar Grove Christmas Walk upon the delivery of new music that was ordered a few weeks earlier. With “Carol of the Bells”, “‘Twas in the Moon of Wintertime”, “Christmas Dreidel”, and “Rudolph the Red-Nosed Reindeer” now in their repertoire, the orchestra performed inside the Wilcox Brothers hardware store, which housed other attractions and was grandly decorated with lights and a tree out front. Other festivities included hay rides, fireworks, and another musical performance, this time by The Flock, outside the store.

The Squire: In your opinion, what is the best part of the holiday festivities?

Mikki Gifford: I really enjoy all of the lights and music.

TS: Which song do you think sounded the best?

MG: I think “Carol of the Bells” sounded the best.

TS: How did the two events differ for you? Did you do better at one than the other?

The Squire: What did you do to get in the holiday spirit?

Grace Larson: I wrapped my bow in ribbon and decorated my violin.

TS: Which song do you think posed the biggest challenge?

GL: “Christmas Song” definitely was the most challenging.

TS: How do you feel the performances went?

GL: Great! No one sounded horrible.

The Squire: What is your favorite part of the holiday season?

TS: Which song did you like performing the best?

SM: Greensleeves was my favorite to perform.

TS: How did you prepare for the events?

SM: I practiced and I dressed up my cello to look festive.

The orchestra had one final performance, the Grandparents’ Tea, at which they entertained with Christmas music as people arrived and were seated. The Grandparents’ Tea was held the morning of December 17 and was hosted by middle school students.