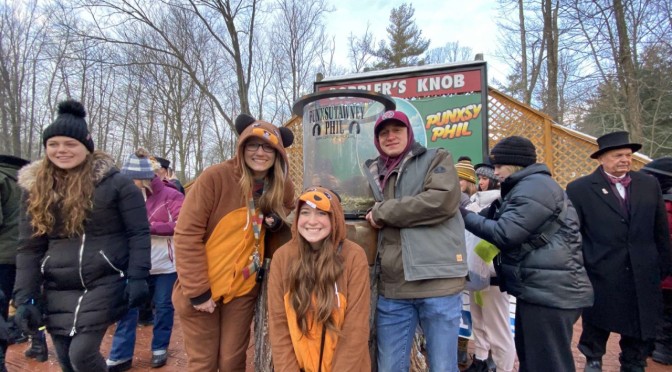 Since 1886, every year on February 2 in Punxsutawney, Pennsylvania, Groundhog’s Day has been celebrated the way that we know it today. The holiday wasn’t always about watching a fuzzy animal look for their shadow to predict how much longer the winter was going to last. According to www.groundhog.org, Groundhog’s Day started out as a Christian holiday where Christians would take their candles to be blessed by the church because they believed it would bring them blessings. Over the years, the tradition evolved into a holiday, which was called Candlemas, where the candle brightness would predict the weather. The idea of the groundhog was introduced when the Germans created their own version of the holiday. They would watch a hedgehog look for its shadow to predict the upcoming weather. When the Germans moved to America, they switched to a groundhog because of the absence of hedgehogs. The first time Groundhog’s Day was shown in the local newspaper in Punxsutawney was in 1886 and the holiday has been growing in popularity ever since.

The Squire interviewed Mr. Shotts, who was a local to the Punxsutawney area, and has been to the celebration in Punxsutawney in person many times. The Squire asked him what his favorite part about Groundhog’s Day is, and Mr. Shotts explained, “Being a Punxsutawney Area High School Alumni, graduating class of 2002, I must say the best thing about Groundhog’s Day is the sense of family that builds around the community. The entire community plans for months and host a full week of festivities revolving around our beloved Punxsutawney Phil.” He also said, “A bonus for the students is that they shut the school down, mainly because the town is inundated by tens of thousands of visitors excited to be part of the Phil fanfare!” The Squire also asked him what he recommended for someone who wants to visit Punxsutawney to watch it in person. Mr. Shotts stated that, “Obviously travel to Gobbler’s Knob and enjoy the time waiting for Phil to emerge from his stump and predict the upcoming winter weather.”

Mr. Shotts recommended to check out www.groundhog.org for more information about the activities on Groundhog’s Day. He explained other activities, “You can purchase tickets to Eat Lunch with Phil at one of the locations around town. From me personally, it is a must that you go on a scavenger hunt to find all the Phantastic Phil’s. These Phil’s are 6-foot-tall statues that were created by local artists situated around the town at various businesses and public venues.” We also asked him what his predictions were about the groundhog’s shadow, and he explained, “From my extensive Punxsutawney Phil knowledge and close connections, I’m going to predict that Phil will see his shadow and proclaim six more weeks of winter.”.

Erin Hagadorn, Eisenhower senior, went to Punxsutawney this year to experience the activities for herself. The Squire interviewed her to ask about her experience. When asked what her favorite part of the event was, Erin said, “I liked how everyone came together for Phil, there was a good sense of community, which was fun.” Erin also recommended going because we live not too far from the area and should appreciate the opportunity. The Squire also asked what the series of events were that morning in Punxsutawney. Erin explained, “We woke up at three and got to Punxsutawney at 5:30. We then got bussed up to Gobbler’s Knob where we waited in the crowd. Then the inner circle came down with Phil at 7:30. After that, we took pictures and did some activities around the town.”

Before Phil is brought out to predict the weather, there are hours of music and a firework show. After the prediction, there is an opportunity to wait in line and get a picture with Phil and then go back on the busses back to the town. In the town, there are venders and activities to keep any tourist entertained. Groundhog’s Day is a lighthearted holiday enjoyed by all ages.

For anyone wanting to take Mr. Shott and Erin’s advice, consider taking the trip down to Punxsutawney next year, which is about a two-hour drive from Eisenhower. The earliest people arrived at Gobbler’s Knob was around 3:00 AM and the last bus trips were around 6:30 AM. Before going, its recommended to look up were the busses pick people up to make sure not to miss them. The busses are $5, but some people choose to make the mile hike up the hill. Make sure to dress appropriately for the cold winter weather and enjoy all the fun Gobbler’s Knob has to offer. This year, Phil saw his shadow and predicted six more weeks of winter.