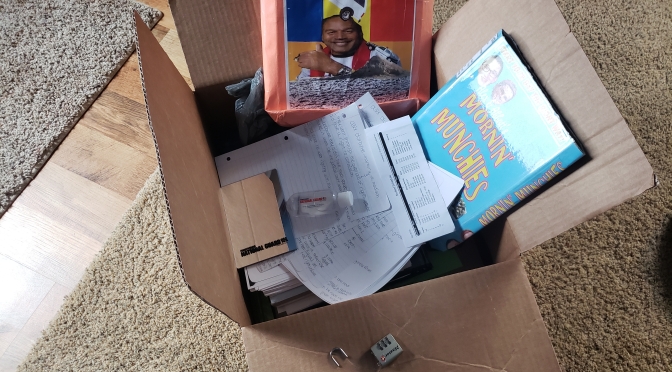 Have you ever watched TV when it’s storming, only to have the power knocked out so you don’t get to see how it ends? That’s what this school year felt like.

On our last day at Eisenhower, which happened to be Friday the 13th, there was talk of school being cancelled for a week, two weeks, or until after Easter. As a senior with different projects I had been working on at school, I hoped that if we did lose time here because of the Coronavirus pandemic, that we would still be able to come back and enjoy the rest of the year.

In every class I had on that particular Friday, there was bound to be someone who asked the teacher “So, do you think school will get cancelled?” In the morning classes, some of the teachers figured that it had a good chance of happening. They thought that if there was an announcement, it would be probably be made sometime around 1:00 pm.

Well, 1:00 came and went as I was sitting in the computer lab for English class that day. By the end of the day, it seemed like we would be returning to school on the following Tuesday, because we were already supposed to have that next Monday off. Then, literally two minutes before the bell rang to end the school day, an announcement came over the loudspeaker saying that school would be cancelled for the next ten business days. While walking down the halls, I saw some people that were happy and some that were disappointed about this news.

Over the next few weeks, the school district would call home and say that, as per the governor’s rules, school would be cancelled until this date and that date. Then, on a chilly Thursday early in April, word came out that school was ordered to remain closed until the end of the year.

Since this is my senior year, the news was disappointing. I’ve been a member of choir since fourth grade and was looking forward to having one last concert. Also, as a three year member of journalism, I had been working more this year on the W-IKE Afternoon Show to improve things such as new intros and music, as well as editing the show frequently.

Despite school being cancelled, we’ve been working to try to continue to some of the fun projects we typically work on in class. The week of May 8 started something new for journalism, as we adapted our weekly news show and it became the W-IKE Afternoon Show from Home, which I was glad to be a part of by editing.

As mentioned in my last Squire article, I have been working since January on a video celebrating the history of Eisenhower and the surrounding elementary schools. The good news is that I am still able to work on it from home, and The Squire will let you know when it’s completed. Another thing in journalism that I missed due to school being cancelled was the annual field trip to Edinboro University, which would’ve been my last ever field trip. It was supposed to take place in April.

The Squire talked to fellow senior Jacoby Drum, who said that he will “miss the boys and our lunchtime shenanigans.” Senior Garret Abbott gave a similar response, “I’m gonna miss the lunch gang.” Lunch was always a fun part of the day; however, Noah Schwartz, another senior, has a few things that he will miss. “There’s a lot of things I’m gonna miss. I’m gonna miss the teachers who helped me, I’m gonna miss all my friends, even my parking lot friends. I wish you all well.”

On Monday, April 29, all of the seniors were supposed to go to Eisenhower and pick up a box containing everything that was in their lockers. When I got mine, it was fun reliving moments from the year as I looked through papers and other items, but also sad to see a year’s worth of memories just boxed up.

I guess it goes without saying, but my advice to underclassmen would be to try to have fun in school, because you never know when it could come to an end. It’s been fun writing for The Squire these past three years, and I didn’t expect it to end by writing an article like this, but it was certainly interesting to write and reflect on my time at Eisenhower.