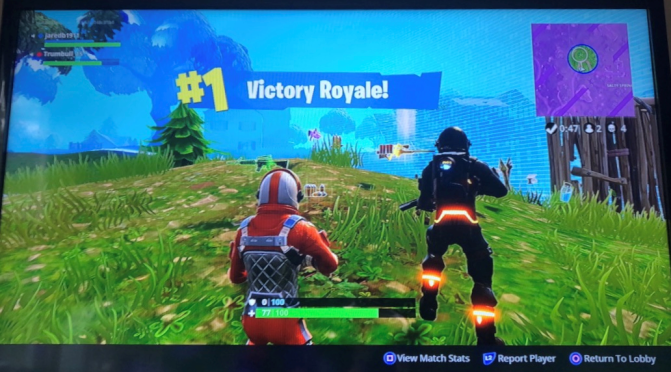 Along with snowflakes and cold weather comes the Fortnite Holiday Update. Fortnite, which is a platform and mobile battle royale game, has a staggering 8.3 million players. The game has one hundred players join with three other friends per player to battle to the death and earn the epic Victory Royale.

Among the update this winter are new holiday skins, which are designed costumes that players can apply to their virtual player. The Squire interviewed Brody Porter and asked him which skin he plans on purchasing.  He shared. “I plan on purchasing the Longshot skin.” In the Fortnite store, there are always items, such as emotes and skins available. Emotes, which are dances and such, are usually seasonal. Players are excited to see what the update has to offer.

Pick axes, which are used to gather building materials throughout the game, are also able to be purchased in the store. Last season the game came out with Christmas themed axes. When asked what pick axe Brody wanted to buy he said, “Hmm… it has to be the candy cane pick axe.” This pick axe will be reappearing from the Christmas update from the last holiday season.

Although the update is highly anticipated by millions of players, it is still not perfect. There are ideas among the players of what to add. Earlier in the season, Fortnite added redeploy, which is the power of deploying your glider so you take no fall damage during the game. Soon after it came out, it was removed. This was obviously Brody’s problem with the update. Some players think that games go faster when redeploy is incorporated into the game, although it is not proven.

The battle bus, which takes you over top of the island where you battle, is also affected by the update. The battle bus drops you from the back, then you glide to where you want to loot for weapons, shields, and medical supplies of all kinds. Brody, shared some insight on the battle bus, “I think the battle bus will have a decorated Christmas tree on top of it.” This is a very appropriate prediction with the upcoming update.

Hopefully, the Fortnite Holiday Update turns out to be one of the best Fortnite updates ever. Have fun over the Christmas break, and just remember that everyone here at The Squire wishes you a Merry Christmas and a Happy New Year!