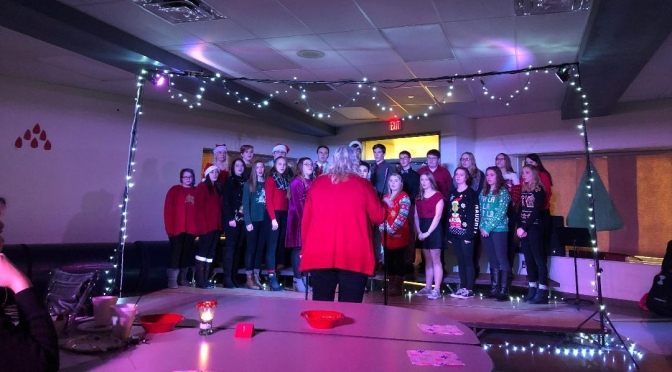 It’s not unusual to hear holiday tunes after Thanksgiving, especially if you are in choir here at Eisenhower. As a member of senior choir, I can tell you that we have been singing Christmas songs and even one Hanukah melody since the beginning of the school year, and our hard work really paid off at the recent coffeehouse event. It took place on Saturday, December 1, with the first show starting at 5 pm, and the repeat performance happening at 7pm.

The event took place in the EMHS cafeteria, and was mostly made up of soloists and small groups of singers, which were accompanied by some banter and one dance routine. One of our Eisenhower teachers performed as well. The entire senior choir and Fantasia groups performed some limited concert material as a taste of what would be in store for the middle level and senior choir holiday program, which happened to be coming up in the next week.

There was a lot of effort that went into putting this event together. Ms. Joy McMonigal, the choir instructor, worked together with the choir officers, Rachel Dietsch, Ashley Hall, Shannon Kellogg, and Hunter Peterson, to make it all happen. There was entertainment, but also food and beverages, hence the name of the event. It was truly a dinner theater. Members of the senior choir, including myself, helped out by bringing in supplies, desserts, beverages, setting up, greeting people at the doors, selling tickets, and cleaning up, among other things.

When December 1 came, some of the soloists and other performers showed up as early as 1:30 pm, and the majority of other senior choir members cruised in just after 4 o’clock. The show began with the entire senior choir performing “Slow Dancing in the Snow,” and then led into musical performances by Shannon Kellogg, Morgan Kellogg, Audrey Kellogg, and Erin Hagadorn. Next, Fantasia performed “Carol of the Bells,” which was followed by a tap dancing routine by Grace Larson, and then intermission came. That’s when people were invited to take more refreshments, which ranged from Oreo lasagna to pretzels, and drinks like hot chocolate, tea, water, and, of course, coffee.

The second half of the program included both the choir and Fantasia, this time singing “Fum, Fum, Fum” and “Sing We All Nowell,” respectively. There were two solos in this portion of the program, sung by Hunter Peterson and Nicole Hitchcock. Eisenhower’s own art teacher, Mr. Pollard, showed off his musical side and joined in on the fun during this act, by singing and playing the guitar. Rachel Dietsch, Ashley Hall, and Maddie Ring performed “The Chipmunk Song (Christmas Don’t Be Late),” which featured James Pollard playing the role of Dave by making sure all the chipmunks were present and accounted for, as well as screaming “ALLLLLVVVVVIIIIN!”

After the coffeehouse was all said and done, The Squire decided to interview Ms. McMonigal all about the show and her thoughts on it. She told us that the event “was a lot of fun,” and that “the students did a great job planning and preparing for it.” The students weren’t the only ones, because Ms. Mc herself “personally made sure the ensembles were ready to sing,” as “the choir officers and students did the rest of the planning and preparations.”

When asked if she plans on having a coffeehouse next year, Ms. Mc said, “Absolutely! It was so much fun.” She said that next year we should have “more advertising,” and, as for this year, she wishes that “more people would have attended.” She also added that “Ashley Hall, Rachel Dietsch, Hunter Peterson, and Shannon Kellogg truly did a fantastic job coordinating everything.”

The MC of the program was Ashley Hall, who kept the banter fun and upbeat, by adding some humor, which the audience seemed to enjoy. The Squire also talked with Ashley about the program, and she thinks that it went “pretty well. As the MC, the turnout was great in my opinion.” Since she is also a choir officer, Ashley had more responsibilities than the average student. She “put forth ideas and listened to my fellow officers. Also, I made the centerpieces.” Her favorite act was Audrey Kellogg and Erin Hagadorn’s version of the Hawaiian Christmas carol “Mele Kalikimaka,” because “it was a beautiful and unique performance.”

Since Ashley enjoyed this year’s event so much, she is obviously looking forward to next year’s, and says that “it will be even better.” Besides more advertising, she told us that there is “nothing else I would ever change.”

The choir has been doing a bang-up job this year, and, if you missed the coffeehouse or holiday concert, The Squire hopes you can come check them out in the new year at some of the upcoming performances, and next year’s coffeehouse for sure.