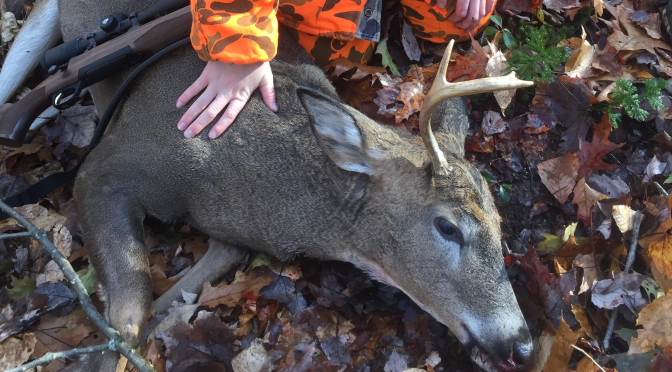 The one and only time of the year that all hunters in Warren County are waiting for what has arrived – deer season! Throughout the summer and fall, hunters have been scouting for that monster buck and waiting for season so they can harvest it. These festivities began the Monday after Thanksgiving and carried on until December 9. However, this season, hunters could only shoot buck for the first week and then doe season opened up for the last two weeks.

Spencer Head, an avid hunter, was very successful this year in both Pennsylvania and New York deer hunting season this year.

The Squire sat down with him this year and asked him some questions on his season.

The Squire: Were you successful this year in the field? If so, tell me what happened.

Spencer Head: I was successful and shot an eight point this year. He came in about thirty yards from me and I took my shot and hit him.
TS: What is your favorite part of hunting?

SH: My favorite part of hunting is the adrenalin rush you get when you see a buck walk through.

TS: What is some of the gear you take on your hunting trips?

SH: I obviously take my gun, my tags, ammo, warm clothes, a flashlight, hand warmers, and other small items I think I might need.

TS: Do you prefer archery hunting or rifle hunting?

SH: I prefer archery because the buck are in rut, which makes them run around a lot more.

TS: What approach do you take while hunting? Do you walk around? Sit in a tree stand? Sit under a tree? Or stay in a hunting shanty?

SH: Normally I hunt in a stand, but, when I start to get cold, I walk around to warm up.

TS: What’s the best time to be in the woods?

SH: Either first light or last light, or around lunch when people start to go in to eat.

Deer season is very important in this area, as many hunters go out and spend a lot of the time in the woods looking for that prized buck and trying to fill up those tags. Not only do people hunt for prizes, but many people eat the meat after they shoot the deer, making a cheap meal that is very organic. So, hopefully everyone had a success out in the woods this year and stayed safe and had fun. If you are interested in getting your hunters license check online for where they will be hosting hunters safety courses.