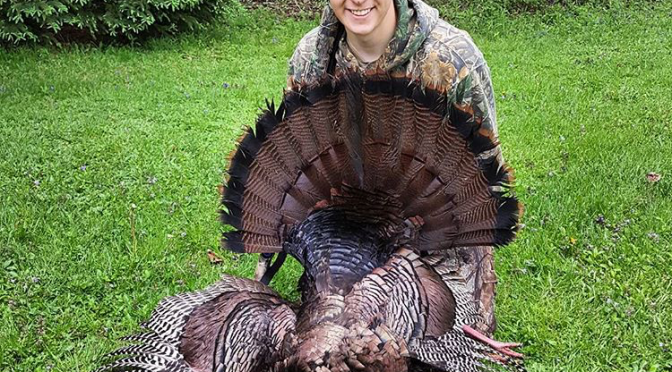 The students at Eisenhower High School are now participating in the spring gobbler season. On April 29, 2017, the madness began with hunters heading to the woods to find that prize gobbler. The season started April 22 for the junior hunters and will continue until May 31. Only one gobbler can be taken per day, but hunters are allowed to take two throughout the course of the season. For all of you non-turkey hunters out there, turkeys are the hardest animal to hunt in PA, in my opinion. They are very cunning and can see color, which makes it difficult to not be seen by their quick eye. Junior, Spencer Head, is one of the greatest turkey snipers around Eisenhower. The Squire interviewed this outstanding hunter on his experiences hunting turkeys.

The Squire: What is your favorite part of turkey hunting?
Spencer Head: Waking up knowing all morning I will be in the woods enjoying nature.
TS: What kind of calls do you use to call in the thunder-chickens?
SH: Normally I use a box call or a mouth call, sometimes a slate.
TS: What time in the morning do you get up to go into the woods?
SH: Normally I wake up at four in the morning and go into the woods at four thirty.
TS:  What is some of the gear you bring along hunting?
SH: I bring calls, my seat cushion, mask, gloves, camo clothes, gun, and, sometimes, a decoy.
TS: How do you call in the gobbler?
SH: I call acting as a hen to get the gobbler to respond, then, when he does, I call back until he comes in.
TS: How often do you go turkey hunting during the season?
SH: Typically, I go every weekend and sometimes skip school to go.
TS: Have you ever shot a turkey? If not, tell of a close encounter you had during turkey season.
SH: I woke up and started calling in the morning. We heard one on the other side of the hill and decided to try and get closer. We moved in and split up and my dad accidently scared it and pushed it right to where I was sitting. I waited until the opportune moment to shoot and got him.

As you can see, the students here are enjoying getting out in the woods hunting these animals. We remind everyone to stay safe while hunting and remember to wear your orange. Best of luck to all of the hunters and get that big one!