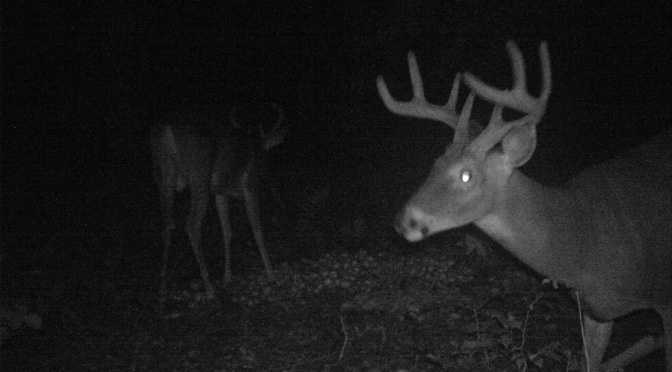 Remember that big buck that disappeared in September after getting trail camera pictures of him in velvet all summer? Now is the best time of the year to get back out in the woods and see if he is still around and made it through rifle season.

With a blanket of snow and no major hunting seasons in right now, you can quickly and easily get a step ahead of all the other local hunters. You can benefit greatly by going for walks in the woods in mid-winter and patterning deer in the late season snow, along with strapping up the trail cameras as deer begin to lose their headgear. As the days begin to get warmer and the snow melts, unseen signs of the rut will resurface and you can learn of some key spots from the most unpredictable time of the year for deer. Also, when the snow melts, the more time you spend in the woods, the better your chances are of finding a hard to come by PA shed antler.

Every winter, anytime from late January into early March, all bucks will shed their antlers and grow them back starting in early June. Prior to this year in Pennsylvania, it has been illegal to possess shed antlers found in the woods. Although the law was not heavily enforced, the popular pastime can now be done worry-free starting this year, as a new law was passed legalizing possession of elk and whitetail shed antler in Pennsylvania. The best place to find sheds is on deer trails between feeding and bedding areas. Also, thick areas with low branches are good places to look as the antlers will fall off when they hit the branches.

The Squire caught up with local outdoorsman and shed hunter, Paul Swanson.

The Squire: Have you had any luck shed hunting so far this year?

Paul Swanson: Not so far; I have been out with my dad a couple times, but hopefully we’ll find some now that the snow is gone.

TS: Do you use any shed traps or other methods to increase your chances of getting sheds?

PS: I have tried before, but I have not had any luck.

TS: What is the biggest shed you have ever found and have you found a match set?

PS: A half of an eight point.

TS: Where do you spend most of your time walking in the woods this time of year?

PS: Through my neighbors pines and along creeks.

In conclusion, you can’t go wrong spending some time in the woods this time of year. Every time, you will learn something, and maybe even come home with a trophy. Also, as we keep getting closer and closer to spring, you can gain the upper hand and get some early knowledge and preparation for spring gobbler as you’re looking for sheds.