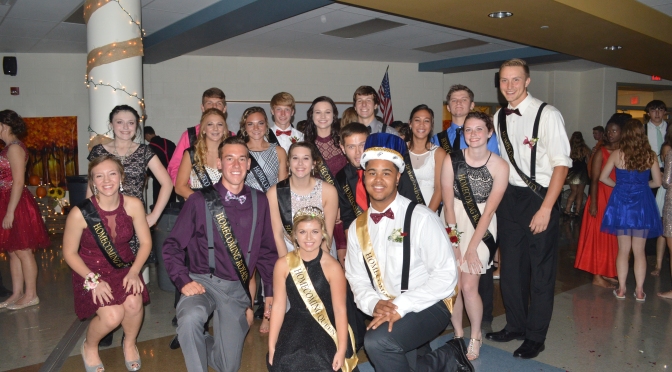 As the football action slowed down Friday night, the true homecoming excitement was only beginning to pick up. Twelve deserving seniors, along with two attendees from each class, took their rightful place under the lights to see who would win the coveted titles of Homecoming Royalty.

The suspense mounted as the crowd waited for the senior winners to be announced. Finally, Mrs. Slattery, the student council advisor, announced the King and Queen- Thomas Warren and Emily Bailey. Emily shared her reaction with the Squire as “OMG. WOW.” While Thomas stated his as “Speechless, stunned that I actually won.” In past years, Thomas’ brother and sister have both won titles as Homecoming royalty, so Thomas is thrilled to carry on the family tradition.

On the flip side of that coin, The Squire caught up with Homecoming hopeful, senior Adam Pascuzzi, to find out what it feels like to come within inches of high school glory, only to fall short. Adam stated, “When I found out, I had trouble dealing with the wave of emotions that came with such an embarrassing defeat. I even had trouble preforming for the rest of the game.” Maybe Adam will have another chance at a royal title when prom rolls around this spring.

With such an impressive crew on court this year, the decision must have been hard to make. But regardless of who you voted for, make sure to congratulate your new king and queen.