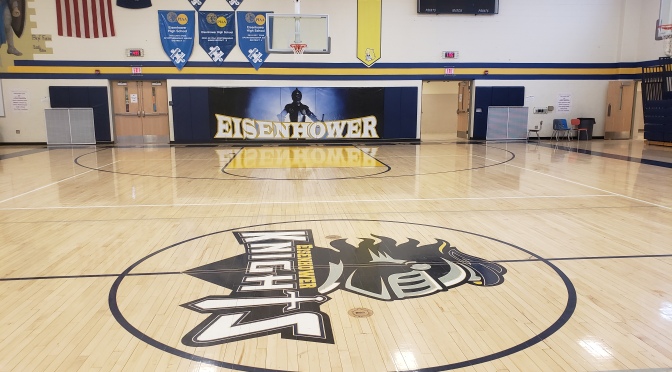 As the holidays near and winter sports get under way, wrestling and boys’ basketball are excited to showcase their hard work. For the wrestling team, they look to build on a very strong season last year and accomplish something that’s never been done in Eisenhower wrestling history. The basketball teams plans to improve after last year’s tough season.

The Squire met up with some hardworking athletes, Teagan Gray, a wrestler, and Zane Alexander, a basketball player, to find out more about their seasons. The basketball team, coming off of a rough year last year, hopes to improve this season. When asked about overcoming these hardships, Zane explained, “We did not play the way we wanted to, but we hope that we can all come together and play as a team and win some games.”

The wrestling team has been getting better and better each year, sending players to states year after year. Teagan, a first year wrestler, is a junior and enjoying his time with the team. When asked by The Squire how he is adapting to the team, Teagan responded with, “They have accepted me and helped me learn the sport. I have learned so much in so little time, and I cannot wait to see where this year takes us. We are a talented group of kids.”

As athletes, most students on both teams have a goal. When The Squire asked Zane about his personal goals this season, he said, “I want to score 15 points a game, and get at least five rebounds, because I’m not that tall.” Teagan also has some goals for this season, stating that he plans to win at least 75% of his matches, and to lose some weight and wrestle a lower weight.

Both teams are looking strong as a whole this year. The basketball team has more senior leaders this year than the last, and the wrestling team has continued to have leaders for years due to high numbers. When Zane was asked what the team is looking like as a whole, he said, “We are looking good this year. Hopefully we can go out try our best and win some games.” Teagan added, in reference to the wrestling team,“We are looking very good, and hopefully can send a few kids to states again”

The Squire wants to wish both the teams the best of luck with their upcoming season. To stay up to date with all the action in boys sports, follow The Squire on Twitter and Instagram. Also, be sure to watch the W-IKE News show for updates and interviews throughout the season.