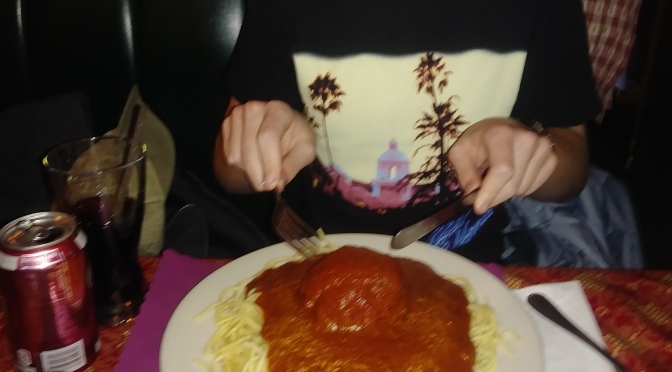 For this edition of The Squire’s restaurant review, we are traveling to a place seemingly in the middle of nowhere, just across the border that separates Akeley, PA from Frewsburg, NY, and going to Old Fentonville Road to review Miller’s Coconut Grove, a historical bar and restaurant best-known for spaghetti. First, we will look at this eatery’s past, and then I will discuss my most recent experience there.

If you paid attention in history class, you probably remember learning about prohibition, when alcoholic beverages became illegal in the USA. It started in 1920 and was repealed in 1933, when the Constitution’s 21st amendment was put into effect. Before that, people undoubtedly found loopholes.

According to the history on the restaurant’s menu, in 1927, two Frewsburg family members, Carl and Sam Lupica, built a gas station, named after a famous Hollywood nightclub, called the Coconut Grove. Since this was in the midst of prohibition, it is understood that bootleggers, people who illegally transported booze all across the nation, occasionally dropped some off here, so if you went there for gas, you could also get a cold one to go.

When prohibition finally ended in 1933, this gas station started legally selling drinks along with food, and became a restaurant. Flash forward 40 years to 1973, and longtime employee Bill Miller bought it. That is why “Miller’s” is in front of the name today. It is also known by locals as “Shorty’s,” because of the Lupicas’ heights. Bill Miller passed away in 2010, and, until 2014, the restaurant was ran by his wife and kids. Then his grandsons, Alex and Tyler, who are still the owners, bought it.

Personally, I’ve been to Miller’s Coconut Grove on multiple occasions, but decided to take another trip there just for this review. After the recent week of two snow days, it was still cold on that Friday, the first day of February. I went there after school on that day, and showed up at about 4:30, a half hour after they opened. Since this was a Friday night, I expected it to be relatively busy, especially at the bar, but when I walked in, there was only one person sitting there. Since I am underage, I had to sit in the back of the restaurant, the dining room, where there was also an elderly couple seated.

Though this eating establishment dates back to the 1920’s, its atmosphere really screams ‘40’s. The dining area was decorated with tin signs, license plates, pictures, and movie posters on the wall. Other decorations included old beer cans, a rocking horse, a pellet stove, which was being used for heating, and a grand piano. The wooden flooring looked very old and the windows had shutters on them. You don’t see that much, unless you go to a grandparent’s house or something. The music they had playing was also reminiscent of the 40’s era, and included Frank Sinatra, Glenn Miller, and Duke Ellington.  It was an interesting atmosphere, but the bar looked more modern, with TVs on the wall and fish tanks in the corner.

Although I’m not a big fan of spaghetti, I ordered it, mostly so I could try one of their “famous ¾ lb. meatballs,” as the menu said. It cost $16.99, but, along with the meal itself, you get a small salad and some bread and butter. Both came before the meal and were pretty good. Then, they brought the spaghetti out.

For those of us who grew up watching “Shake It Up” on Disney Channel, you probably remember the episode where CeCe and Rocky went to an Olive Garden-style restaurant and had to eat a giant meatball in order to get a free meal. I was expecting something that big when I ordered. In reality, it wasn’t much bigger than a baseball. I wish it would’ve been, because it was darn good.

The spaghetti itself was average, but pretty decent, even with their “homemade sauce.” I also sampled their chicken fingers and fries, which I found to be exceptional and above average. They only cost $7.99, along with an extra $3.99 for the fries, which is kind of overpriced. There were about five chicken fingers and a large helping of fries, plus some celery, and the condiment of your choice, which was ranch, in my case.

The service was somewhat kind of slow, but it was well worth it. It was 5:45 before I left, and, by that time, there were more customers in both the bar and dining areas. I’d most definitely go back again, and, if you haven’t been there, I highly recommend that you go, but enough about me. The Squire has talked to other students at Eisenhower, including senior Garret Bailey, and found that they are fans of this restaurant and its food as well.

On a scale from 1 to 10, the Squire gives Miller’s Coconut Grove in Frewsburg a solid 7, factoring in the prices, the quality of the food, and the atmosphere. If you are a big fan of spaghetti, we recommend that you try theirs, but don’t forget to bring your wallet. There’s a lot of dishes you’d have to do to pay back that cost!