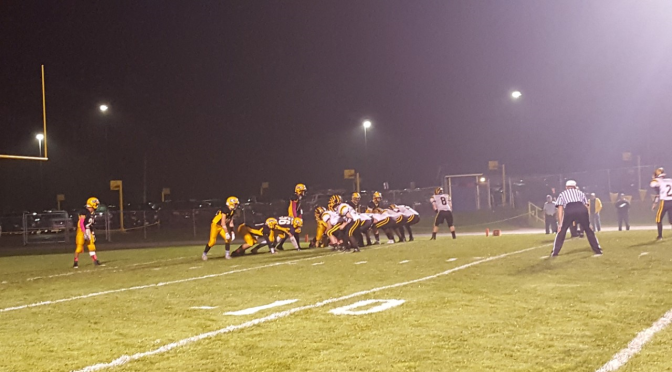 Ready, set, fight! On October 6, 2017, the “Pink Out Game” did just that. Every year at Eisenhower, a breast cancer awareness game is held in October to help raise money for the cancer treatment center. People attending were to wear pink in support of the event. The EHS football team and cheerleaders wore pink Friday during school to start off the celebration early.

During the game Friday night, The Squire caught up with some fans. Sitting in the student section was Delany Nizzi, who told us how she would try to make a difference, “If I was to try to raise awareness for breast cancer I would sell T-shirts.” She goes on to say,” The Pink Out Game is a great way to remember the people who have been through, and are even suffering from breast cancer”.

The pen pal meet-and-greet was held Friday as well. A few lucky elementary students got a chance to write to the football players during the football season. On Friday, those students had a chance to meet them in person. The football team and cheerleaders ate lunch with their pen pals and after the game Friday night, they had more time to spend with their newly made friends. The excitement from those kids seemed to uplift the player’s spirits after a tough loss to Maplewood.

Overall, the game was a rough match for our players. Maplewood won 23-0, but our players didn’t wear down. The fans cheered their hearts out and there was a lot of pink in the stands. In recognition of this event, two pink awareness ribbons were painted onto the field in honor of the breast cancer victims and survivors. Everyone seemed to enjoy themselves in one way or another. Many were chanting for the Knights and many excited Eisenhower students were off playing, laughing, and bonding with friends and family. One thing about Eisenhower football games is that everyone comes together to have a great time and support a great cause.