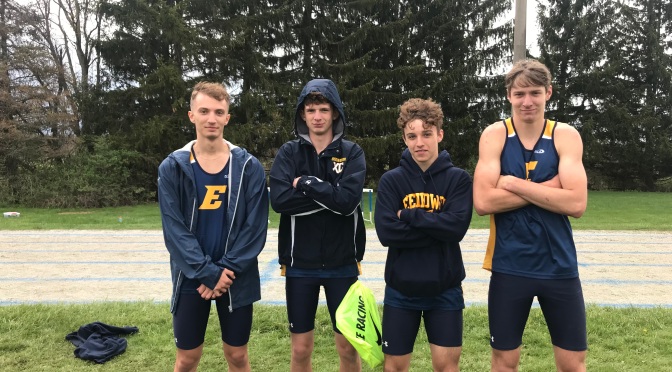 The winter melts away into spring, new flowers bloom, and the boys of Eisenhower are working hard to be the best athletes they can. Eisenhower provides the boys with the options of baseball and track for spring sports. This year’s teams are working the hardest they can, to do their best.

The track team has had some big opportunities this year, such as going to the Slippery Rock Invitational which hosts around sixty schools. The Squire interviewed Austin Hannold, a Junior at Eisenhower and member of the track team, to get an insider’s scoop on how the season is going. Hannold was asked what his team’s biggest strengths are and he explained, “…the bond we have and communication for hand offs.”

Like every team, the boys track has its strengths and weaknesses. Hannold shares that although the team is looking strong, they need to work on building endurance, as well as attending practices. Despite this, they are looking forward to finishing the season out strong.

As serious as the work is for track, there is a fun side to the sport. Hannold said his favorite part of the sport is, “All the bus rides and messing around with each other at practice.” The Squire asked if Hannold had any favorite memories from his track season, so far, and his response was, “Going on fun runs with coach Shrek.”

Not only does Eisenhower have an amazing track team, but they also have an equally hard-working baseball team – a team with ambitions of its own, working to be the best they can be, as individuals and as a team.

Baseball is a well-loved sport across our nation, and it is no different here at Eisenhower. The boy’s baseball team works hard every day to play to their best on the field, and to be their best off of it. The Squire asked senior, Cole Chapman, a few questions about his final baseball season. When asked what his favorite part of the sport was Chapman said, “My favorite part of the sport is the environment of a baseball game and there is always at least one good outcome of a game.”

Good outcomes happen by working hard during practices and acknowledging both strengths and weaknesses. According to Chapman, the younger players have really been working hard and playing their hardest. He says that this year has been a, “rebuilding year” for them.

Throughout this season, some of their biggest strengths have been how they play out in the field. Chapman explained, “After the first few games, we cleaned it up and have looked better.” However, just like every team they also have things they can improve on. Chapman mentioned how they need to improve their hitting and start putting up runs for their pitchers.

The baseball team is working hard toward what they hope is playoffs. The Squire asked Chapman what the team’s goals this season are, and he shared, “Our top goal is to grind it out and win the big games we need and maybe sneak into a playoff spot.”  The boys are doing their best to make these goals happen.

Come support the baseball team and the track team in their goals. Cheer on Eisenhower and see how the seasons play out for both hardworking teams.