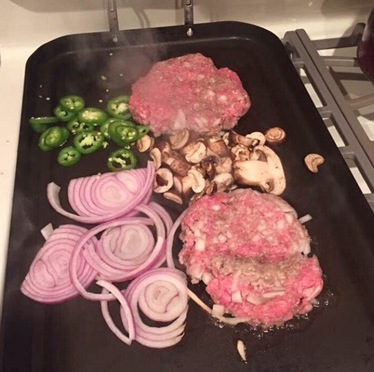 Every year the Eisenhower Knights play an annual Homecoming football game on the “Pasture of Pain.” This year, they faced off against the Iroquois Braves. We all know that the team must put in a great deal of time conditioning and practicing for their games. However, there’s more to preparing for a game than just practicing. Many players pay close attention to their meal prep in order to ensure they play their very best. The Squire sat down with Eisenhower running back Bryon Braswell to find out what he eats to fuel his performance on the field.

The Squire: What is your favorite meal to eat before the big game?

BB: I usually like to drink milk and go out to subway before the game with the guys.

TS: How much Gatorade or Water do you drink before the game?

BB: I try to drink six bottles of water or Gatorade to make sure I’m hydrated.

TS: How do you decide what you like to eat before the game?

BB: Whatever I’m in the mood for basically, but within reason.

TS: What do you eat to help your performance?

BB: I try to eat something generally high in carbs and meaty protein to give me great energy.

TS: When did you realize that eating healthy helped your performance?

BB: I really realized it when I ate healthy for a whole week and it helped a lot, so I’ve been doing it ever since.

TS: If you could give some tips on what to eat, what would they be?

BB: I would say stay away from processed foods and stick with whole foods.

TS: What would be some tips to make eating healthier easier?

BB: Try to start with eating more fruit since it is easy and quick to prepare.

After talking to Bryon, The Squire looked further into the topic of nutrition and performance to verify his thoughts. What we found supported all these claims he made and then some. According to MedlinePlus.gov, “You are more likely to be tired and perform poorly during sports when you do not get enough calories, carbohydrates, fluids, iron, vitamins, and protein.” So before you think about stepping out on the field or court, consider eating healthy like the rumbling running back, Bryon Braswell, and maybe you’ll see the difference in your play as well!